Where I Sometimes Write Stuff
Write365 2.0

Today we're releasing Write365 2.0 for iOS, the first major update to the app since its initial release.

The entire UI has been updated, giving the app a new, fresh look. The app now features 1 main button to generate a prompt, and has been placed so it is easy to use one-handed. We're hoping the app is easier for users to use regardless of screen size.

We've also implemented new sharing and integration options leveraging the iOS9 share sheet. This will give users more options for sharing prompts with their friends, or with their favorite writing app. 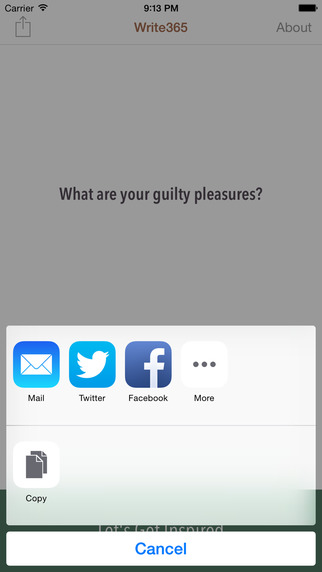 Finally, we added a bunch of new prompts to the app. We're at around 450 prompts now so hopefully we can spark some interesting creative ideas for our users.

The app is still $.99 for new downloads and a free upgrade for existing users.

You can buy it here

For those interested in the technical side of the new version, read on.

This version of Write365 was written in Swift, being rewritten from Objective C.

Initially, I was hesitant about rewriting the app because I didn't want to break anything and be unable to fix it. The Swift community is still new, and things are changing rapidly.

Since this project has never been a money maker, and always more of a platform to learn on, I eventually threw caution to the wind and began to port it to Swift. The rewrite process was actually much easier than I thought.

Technically, after I imported the Objective C headers, rewriting the actual code in Swift was a breeze. Objective C was never a language I enjoyed working with, partly because it was hard to understand coming from a brief background in Python. But Apple's documentation along with tutorials and a helpful community made porting the app really easy.

Okay, enough with the boring stuff